The Best Winter Destinations For Your Winter Vacation 2021

Come the colder months, a good population of vacation-goers would aboard a plane and would rather spend their December holidays underneath the warm sun rays of tropical countries. But some would choose to embrace the cold and travel to places where winter wonderland exists.

While others would argue that taking a holiday in cold, dull, and bleak places beats the purpose of a relaxing vacation, we are sure they’ll change their mind once they see the best winter destinations!

There’s not much to do in the area but sightsee but we think that the scenic view is worth it! Gulfoss waterfall is located in the canyon of Hvítá River, southwest of Ireland. It is one of the most stunning waterfalls in Iceland and is a joy to visit.

The water from the falls comes from Langjökull, Iceland’s second largest glacier, which travels down to Gulfoss’ two magnificent stages.

It’s an impressive sight to look at even during the summer but it looks more beautiful during the winter season where the waters turn to bright shades of blues and the rocks are topped with ice and snow.

This quaint mining town is situated between the 74th and 81st parallel. That’s located on the northernmost part of the Earth and is one of its inhabited areas. But this town has a special event that would awe you to the core.

Since it is located in the upper part of the world, it is a prime (and wonderful!) location to experience the Northern Lights and Polar Night.

Polar Night can be seen between Mid-November and the end of January. During this period in Svalbard, Norway, the sun never rises and the lightest the sky can get is a beautiful twilight blue. Since there’s no sunlight, this increases your chances of spotting the aurora borealis.

Though that certain phenomenon is quite difficult to predict, Svalbard is still a charming winter destination.

Slovenia’s Lake Bled is a postcard-perfect scenery. It is located in the Julain Alps in northwestern Slovenia and surrounds Bled Island, which stands several buildings, including a famous church that witnesses a good number of weddings every year.

Fun fact! It is considered good luck if the groom carries his wife up the 99 steps of the church and ring the bell at the top!

The lake turns into a frosty blue during the winter. It’s a beautiful change as it reflects the surrounding snow-capped mountains. If you wish to visit, you get to enjoy skiing or head on to the neighboring Vintgar gorge, where many waterfalls, pools, and caves can be found.

The Russian winter is harsh and can last for several months. But there are still brave souls out there that would endure the brutal winter in Russia in exchange to see the magnificence of Lake Baikal.

Lake Baikal is the largest and clearest freshwater in the world. It’s also the oldest too, estimated to be 25 million years old. During the winter, the lake transforms into a 12,200-square-mile of ice rink. There are various activities to enjoy in the area, such as dog-sled, snowmobiling, and even ice diving and rafting in some areas of the lake that hasn’t frozen over.

If you are looking to relax in a stunning ski town with beautiful snow-capped mountains, Dolomites is an impressive winter destination. It’s the perfect day trip if you are coming from Venice and has one of the most beautiful alpine drives in the world. The slopes can be accessed through the 86-mile Great Dolomites Road.

There are various activities too, such as tobogganing, cross-country skiing, ice skating, winter and snowshoe hiking.

Just the west of Heber City resides a humble town that is a must-visit during the winter. Midway in the winter is a fun place to be with a lot of interesting activities to do. They have skiing, horsedrawn sled, and even a year-round scuba diving, big thanks to its geothermal caldera.

But if ever you are celebrating the winter holidays in Midway, there’s one activity that you should never miss. Yearly, teams of artists build massive and meticulously made ice castles, made with 20 million pounds of ice.

China has a lot of beautiful places but if you happened to be in the country during the winter season, you have to visit Harbin City.

This is the second Iceland location we have on the list and it is just as beautiful and impressive as the first one. Kirkjufell is located on the North Coast of the Snæfellsnes peninsula, West Iceland, is a mountain with an insane amount of beauty. It’s a wonderful sight during the springtime but it shines even more in the colder season and is a good winter destination to visit.

It looks straight out of fairytale books and is one subject that nature photographers love. Once you’re done sightseeing, you can relax in the small town of Grundarfjörður.

Abisko, located in Northern Sweden, is a village that contains Nordic wildlife, meaning this place has an abundant number of reindeers! It is situated near the Abisko National Park and is also another winter destination where you can catch the appearance of the aurora borealis. So if you are a fan of that wonderful phenomenon, you can visit this wonderful village.

For both locals and tourists, activities like dog sledding, ice fishing, and telemark skiing are fun things to do.

Bergen is a real-life idyllic Nordic village with its colorful wooden buildings, breathtaking harbor, and scenic views of the fjords. It looks stunning during the summer and it is just as impressive during the winter season. Especially since you get to see the Northern Lights. You’re freezing yet but you get to see the beautiful phenomenon so we say it’s worth it!

Previous
10 Ancient Towns in The World That You Can Visit

Next
The 10 Most Dangerous Volcanoes in the World 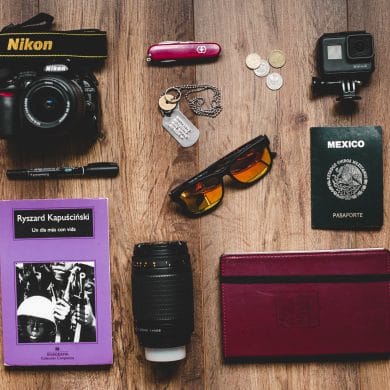