Amazing Ancient Ruins in the World

There’s more to the world than meets the eye and what we read from history books and archeological reports is only the tip of the iceberg. The majority of the information we know about these mysterious ancient ruins comes from pictures and documents left behind and for some ancient ruins, there are more questions posed than answers given.

Historians, archeologists, and geologists have tons of theories and while a few have been proven, there are still dozens of speculations that are yet to be supported.

The Most Amazing Ancient Ruins

A good number of these ancient ruins are believed to be thousands of years old and still continue to amaze the most curious minds. Aside from these, there are also outstanding ancient towns littered around the world worth visiting.

Located near the town of Dambulla in Sri Lanka is Sigiriya, an ancient fortress carved into a 200-meter vertical rock. Known as Lion Rock, intriguing remains of an ancient civilization can be seen. It is believed to be the capital of the kingdom of Kassapa.

It has a citadel, an upper palace, a mirror wall with beautiful colorful frescoes, and a gateway shaped like a lion. It was believed that after the king had passed away, the capital was abandoned and was used as a Buddhist monastery until the 14th century.

Take note that the climb to Sigiriya is challenging and not for the faint-hearted. But if you love the thrill, the scenic view that this ancient ruin offers is definitely worth it.

Masada is definitely one of the most impressive ancient ruins on Earth. This ancient fortress is built on a cliff top that overlooks the Judaean Desert and the Dead Sea in Israel. It dates back thousands of years ago and is the palace of King Herod.

Though it is thousands of years old, it features modern comforts such as a bathhouse and private swimming pools. Masada is a defensive wall and is a representation of the Jewish Revolt, a symbolic importance of Jews who chose death over Roman slavery.

Hampi is the second-largest medieval city after Beijing and is one of the wealthiest cities in India. It was the developing center of the Karnata Empire where temples and imperial palaces can be found. Today, only collapsing ruins remain.

Hampi was founded in the 14th-century by two princes and started as a simple riverside religious center. The capital includes a temple as the royal family’s personal place of worship, the House of Victory, the Vitthala Temple and the main temple with carvings of mysterious-looking sea creatures.

One of the most famous ancient ruins of all time is Pompeii, found near the Italian city of Naples and was destroyed to booming ashes and dust when Mount Vesuvius erupted in 79 AD. The lives of 2,000 Pompeii residents were taken by the tragedy.

Pompeii was first discovered in the 1950s. The ruins were well-preserved and two decades later, it was properly excavated. Currently, 22 of the original 66 hectares have yet to be unearthed. And as you walk through the streets of the ruins of Pompeii, you’ll be able to see the remains of stone houses, temples, bakeries, and even a brothel.

The Ellora Caves are located in Maharashtra, India and are believed to date back to 600 AD. The Buddhist, Hindu, and Jain monks crafted these ancient ruins for over 5 centuries. It is a series of caves, monasteries, chapels and temples engraved in a basalt cliff.

The main feature of the Ellora Caves is the Kailasa Temple, the largest monolithic sculpture in the world dedicated to Lord Shiva. Other amazing sites are the large Buddha in the Carpenter’s Cave and two huge statues of Indra in the Chota Kailasha Cave.

Situated on the Yucatan Peninsula, Chichen Itza is a famous archeological site on Earth. It was a flourishing pre-Hispanic city built by the Mayans in 600 AD. When Mayapan became the capital in 1221, Chichen Itza was abandoned.

The highlight of this ancient ruin is the Temple of Kukulkan, a giant stone pyramid consisting of 4 stairways that represent a compass and  365 steps for the days of the year. To fully bask in the experience, visit during the spring or fall equinox just when the sun creates a light show on the stairs.

Other significant sites are the Temple of the Warriors, the Maya Ball Court, the Wall of Skulls, and the Sacred Cenote, once a site for human sacrifice.

A trip to Myanmar will offer you the amazing ancient ruins of Bagan, a temple town that was once the capital of a powerful kingdom in the 11th and 13th centuries. It had over 10,000 temples, monasteries, shrines, pagodas, and stupas.

However, as years pass, these sites have fallen due to Mongol invasions, neglect, and natural disasters. To date, only 2,000 temple ruins remain and have been scattered all over the area. You can choose to venture into the Bagan Archeological Zone by foot but the best view is through a hot air balloon ride.

Borobudur is the largest Buddhist temple in the world and is made out of two million blocks of volcanic stone. It dates back to the 9th century and eventually fell into ruins. It was discovered again in the 1800s and has since been restored.

The monument has six square platforms topped by three circular platforms. A pathway leads to the base of the pyramid and up to three levels of Buddhist cosmology, the world of forms, and the world of formlessness. It has over 2,000 reliefs and 500 Buddha statues, each representing Buddhist teaching.

Previous
10 Great Fortresses Around the World 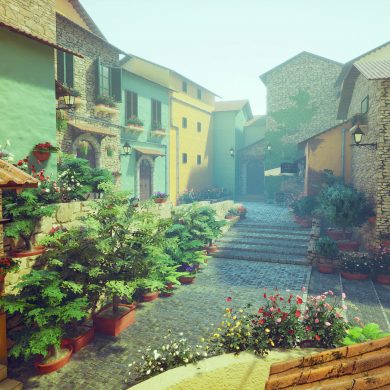 10 Ancient Towns in The World That You Can Visit
We use cookies to ensure that we give you the best experience on our website. If you continue to use this site we will assume that you are happy with it.OkNoPrivacy policy