The Best National Parks in the World

To protect Earth’s most treasured and diverse ecosystems, national parks were created. By definition, a national park is a natural park protected by the government for preservation and conservation purposes. While national parks can be used for recreational and enjoyment purposes, if not all then the majority of the landscapes and the animals and plants found within are kept in their natural state.

According to the International Union for Conservation of Nature, there are 4,000 national parks scattered all over the planet Earth and there are various ways to explore and enjoy these nature reserves. You probably won’t be able to visit them all, unless you really plan to, but if you are planning to visit a few, we’ve rounded up the best national parks you can always visit and explore!

Ranthambore National Park is located in Sawai Madhopur, India. It’s one of the biggest and well-known parks in the country and one of the few in the region where you’ll be able to spot royal Bengal tigers in their natural habitat. The best sighting is between November and May so you better schedule your visit during these months.

Aside from the big cats, you’ll also be able to see Indian leopards, sloth bears, striped hyenas, and other interesting wild animals. The national park also offers other activities aside from wildlife watching such as exploring the ancient ruins found all around the park, including a fortress that overlooks the whole jungle.

Located in Iceland, the Vatnajokull National Park is one of the three national parks in the country. It is well-known for its impressive glacial ice, waterfalls, deep valleys, and active volcanoes.

The Vatnajokull National Park is the largest national park in all of Europe, encompassing two former national parks in the southwest and north of the country. It’s also the home to the second-largest glacier outside of the Arctic, the humungous Vatnajokull glacier.

It’s accessible all year round and there are facilities for your needs, such as free toilets and parking and paid internet. To explore the park, there are treks, ice walks, skiing trips, ice climbing, and snowmobiling. Of course, all of these activities are guided to ensure your safety as a visitor.

Situated in the Sichuan province of Central China is the Jiuzhaigou National Park, also known as the Jiuzhai Valley or the Valley of Nine Villages, named after the nine ancient Tibetan villages in the park. The park is well-known for its giant pandas and Sichuan Golden Snub-nosed monkeys, however, sightings of these are extremely rare.

Aside from that, visiting the national park offers you scenic views of multi-stories waterfalls, massive karst mountains, and impressive lakes that shine in blues, turquoise, and greens. One of the famous lakes is the Five Color Pool, also known as the Jade Pool, with its color-changing waters.

The largest and deepest lake in Jiuzhaigou is the Long Lake. It is surrounded by snow-capped peaks and forests and a sight that photographers would die for.

Croatia’s Plitvice National Park is home to some of the most beautiful attractions in Europe. The park has 16 interlinked lakes and forests with 12 upper lakes and four lower lakes. The magnificent lakes change colors depending on the angle of the sun and minerals found within the waters.

Plitvice National Park allows you to hike along the trails by the lakes and within the forest. Aside from this, you might also sight some wildlife, such as European brown bears, wolves, and wild cats. The park also recorded around 126 species of birds, including the large and rare game bird Capercaillie.

The most well-known national park in the USA goes to Yosemite National Park and we see no reason why it shouldn’t! It is located in the Sierra Nevada Mountains in California and has impressive landscapes consisting of granite cliff tops, waterfalls, lakes, streams, and the massive sequoia groves, the largest trees on Earth.

There are over 1,200 kilometers of hiking trails with varying difficulties so surely there is a trail for beginners to expert hikers. One thing is for sure, all of these hiking trails eventually lead to Glacier Point which gives a heartstopping view over the Yosemite Valley.

If you are not a fan of hiking, there are still over activities to enjoy such as horse riding, rock climbing, skiing, and golfing. You can also sightsee 300 species of vertebrae animals and over 150 bird species.

Residing within the park are extraordinary glacier-tipped fjords that you surely couldn’t take your eyes off but the major highlight has to be Milford Sound, the park’s most visited destination and the only fjord in the park that is accessible by road.

Milford Sound is over four hours’ drive away from Queensland but it receives almost a million visitors every year.

Situated off the coast of Ecuador lies Galápagos National Park, one of the most biologically diverse locations in the world. It was established in 1959 and is Ecuador’s oldest park. It covers 97% of Galapagos island while the remaining 3% remains to be inhabited islands.

Found in this park are animals, plants, and fishes that cannot be found anywhere else on the Earth. Galápagos National Park is the only place where you can find penguins in the Northern Hemisphere. And fun fact, there are more iguanas than people!

The Galapagos is the home to its own species of tortoises, penguins, and lizards. Aside from protected wildlife and land, the offshore waters are also under the care and protection of the Galapagos Marine Reserve, including distinct marine life like the Galapagos green sea turtle, Galapagos sea lion, and Galapagos marine iguana.

Serengeti National Park is located in Tanzania and spills over into Kenya’s Maasai Mara. Serengeti, which means ‘Endless Plains’, is one of Earth’s most famous and alluring wildlife-watching spots on Earth. The Serengeti National Park is famous for its annual migration, where millions of wildebeest, zebra, and gazelle journey to the Maasai Mara in Kenya for water and fresh grass.

Since the plains are out in the open, the game of predators and prey are always in play so expect to sight a killing right in front of your eyes. Aside from the Great Migration, the national park also has a lot more activities to offer.

Previous
The Best Hiking Trails in the World

Next
The 10 Most Beautiful Castles in Europe 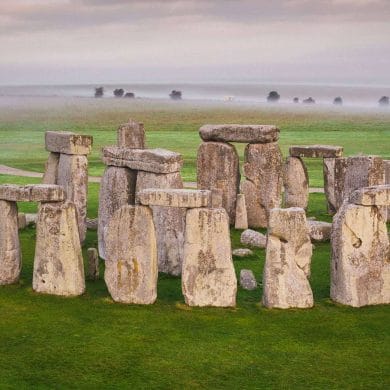 Stonehenge in the United Kingdom: Must-Know Information and Guide